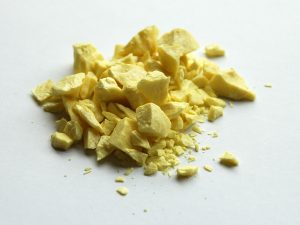 If you’ve never heard of sulphur inlay before, you’re not alone. Even in the 18th Century, when the technique was popular, relatively few people knew about it.

The fact that it was developed and used by Pennsylvania Germans in, and around, Lancaster, PA (a few of which traveled down through the Shenandoah Valley and settled in North Carolina) didn’t help spread the virtues of this inlay method. The vast majority of period examples hail from the greater Lancaster area. 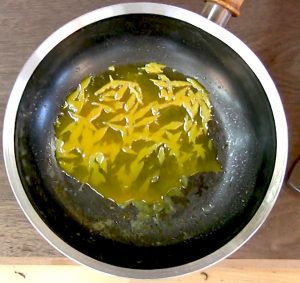 The technique, also known as, “poor man’s inlay,” uses elemental sulfur to create the inlay. Sulfur is uniquely suited to wood inlay because of its low melting point (239.4° F), and it expands as it cools. The low melting point means there’s no charring of the surrounding wood, as there would be using a soft metal like lead (melting point 621.4° F, well beyond the point where wood burns).

People often confuse sulphur inlay with putty. Because it cools quickly, you’ll get less penetration of the inlay material into the pores of the wood. If you tried to smear putty into the carved design, the surrounding pores would also be filled. 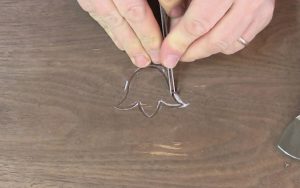 Because the molten sulfur expands as it cools it is a nearly perfect inlay material. When carving the design, you merely need to make sure the sidewalls are either perpendicular or slightly undercut. As the sulfur returns to a solid state, it locks itself into place. Many period examples retain all (or nearly) of their sulfur.

You can freehand sketch the design onto the piece, or you could enlarge a photo, cut it out, and use it as a stencil or pattern to transfer the design. If you’re a power-tool user, make a series of templates for the router to create the recess for the sulfur. Create the design and recess for the inlay using any number of methods.

I’ve demonstrated this technique at numerous woodworking clubs, conventions, and shows across the country. To preemptively answer the most common questions: it’s an element and doesn’t come in any other colors; if you add colorants to it you’re creating a compound that modifies the desirable aspects of sulfur; it’s impervious so you can stain and finish over it without fear.

If you’d like to learn more about the carving and inlay techniques used in this video, check out my Carved Elements class in August, or my Veneer & Inlay class in November. Use the discount code Sulphur at checkout to receive 10% off*.