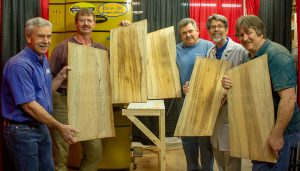 I warned them; I knew it would come to this. The five of us, connected in some strange way. If only we had taken care when logging lunar lumber. But now it’s too late.

Charcoal filter masks. Safety glasses with tight gasket seals. Hell, I had even suggested custom fit hazmat suits with triple air filtration, but no. They would have none of it. You can’t mess around with things you don’t understand!

I’m documenting all of this so others may learn from our…adventure. It’s up to you, dear reader, to ensure humanity knows precisely what we’ve done.

It all began innocently enough – Alex Snodgrass asking if I wanted to be part of a team on a top-secret mission. After he told me everyone involved, I was sure I wanted in. Each of us had the necessary experience, specialized skills that would contribute to the success of the mission.

On March 25th, 2019, we gathered in Christiansburg, Virginia, at the workshop of Alex Snodgrass, bandsaw expert, and Moon Tree Logging Team leader.

So, that’s what we’re calling ourselves now; The Moon Tree Logging Team. Fitting, if not wholly appropriate.

The remaining members of the team – Scott “Shuttleman” Phillips, the to whom NASA gave the remaining section of the Kennedy Space Center Moon Tree. Ron Heman, the wayward dendrologist (often strays from this to build something). Jim Heavey, occasional woodworking journalist (see Ron Herman note, apply to Jim). And yours truly, Chuck Bender, cabinetmaker and sometimes woodworking videographer (see Ron Herman note, reverse it and apply as needed until rash disappears). A motley crew of woodworking misfits tasked with a seemingly impossible task – saw the remaining log from the Kennedy Space Center Moon Tree into useable lumber.

A portion of the material produced was given to Rosemary Roosa, daughter of Stuart Roosa, the Apollo 14 astronaut responsible for taking 500 tree seeds into lunar orbit. The slab has been laser engraved and is now a memorial to her father, which Rosemary has generously put on display at NASA’s Marshall Space Flight Center in Huntsville, Alabama.

Another portion of the material was to Martin Guitar, to create a unique instrument commemorating the 50th anniversary of the moon landing. The guitar became the center of a contest for singer/songwriters across the nation to come up with an original song to be performed on the Moon Tree guitar.

The video below documents precisely what took place that fateful day in March of 2019. What is not shown is the bond that developed on that day between the members of the team. Five men inexorably bound by a profound historical experience. From the entire Moon Tree Logging Team, we sincerely hope you enjoy the journey as much as we did.

My only concern is, since participating in this adventure, I’ve been feeling a bit like Kane.