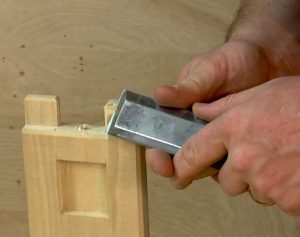 Slicing cuts give you far more control than the ordinary blunt paring cut, and they give you more control. There’s also the added benefit of less tear out. But why?

The slicing cut tends to do less damage because you aren’t approaching the grain head on. It’s a shear cut, coming at the fibers steeply across the grain.

Think about trying to eat a nice juicy steak. Is it easier to take the knife and bludgeon a hunk off cleaver-style? Or is it easier using a sawing motion? It’s that sawing or slicing motion that gives the cleanest cut with the least effort. 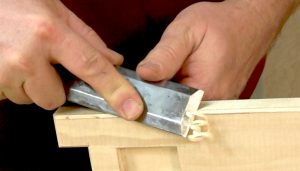 Slicing works whether you are working long grain or end grain. By skewing the blade, and making the cut from one side of the chisel to the other, you’re creating a shear-cutting action. Slicing at an angle allows each fiber being cut to be supported by a longer one beneath it. You’re always cutting the shortest fiber first. 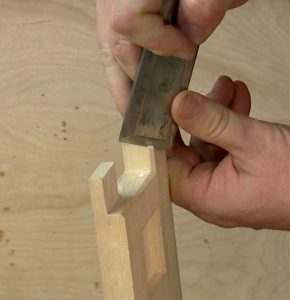 When cutting across end grain having each fiber supported as it is cut means you’ll get less blowout if you start the cut on one side of the board and exit the opposite side. Typically, you would work end grain from both edges into the middle. Using a slicing cut, in some instances, allows for the occasional slip across the board.

The slicing cut is particularly handy on long-grain cuts in figured material. Because you’re shear cutting, you’ll get less tear out on directional fiber changes. It’s the same principle as skewing a hand plane or a board as you pass it over the jointer.  By shifting the angle at which the cutting edge meets the grain, the result is a smoother surface.

Before you run off, slicing cuts are one of the basic carving chisel cuts as well. You can learn more on my YouTube channel by clicking here or you can check out my upcoming carving class, August 19 through 23, 2019.

Posted on May 17, 2019May 22, 2019 by Chuck — Leave a comment
Categories: Chisels, Hand Tools, Parings - A Woodworker's Journal
Tags: acanthus workshop, bench chisel exercises, Chuck Bender, how to use a chisel, woodworking
Leave a Reply Cancel reply