I saw the South Windsor, Connecticut highboy on my first tour of Winterthur, and my initial thought was, “That looks like something out of Disney’s Fantasia. I hope I NEVER have to build one of those.” Sometimes things don’t work out the way you want.

After including a picture of my version of the highboy in last week’s post on cabriole legs (read it here) I got some messages wanting to know more about it. My first thought, “Why?” It’s quirky, looks like it’ll walk around the room even when you’re there, and it’s got the oddest proportions of nearly any piece of furniture I’ve made. But, then I realized it’s exactly the kind of piece I would want to know more about. So, I logged in this morning and shut down the post I had scheduled and threw this one together instead.

Before I jump into showing you the gritty details of this highboy, there are some things you should know. I did not make this piece on speculation; someone requested I make it. As the project progressed through the research phase, the scope morphed into something similar to the highboy itself – a little quirky, and bottom heavy.

The client had seen the original at Winterthur and asked me to make, “an exact copy.” Then, as I was attempting to gain access, he went into the museum and took nearly 200 photos, bad move. I believe he remains banned to this day.

But that didn’t deter him; he stumbled on the example at the Metropolitan Museum of Art (it’s in New York if you didn’t know). That revelation led to making a hybrid of the two pieces, which led to making the entire piece without the aid of electric (other than to power the lathe) and several other minor modifications. The customer was intimately involved.

So far, I’ve bashed the design of this highboy soundly, and unfairly. Sure, it has an underwhelming crown molding and disproportionate upper and lower cases, but it’s from Connecticut. If you’re unsure what that means let me tell you that furniture from the Connecticut River Valley is known for its oddity.

The region is close enough to New York and Boston to show some influence in their designs, but it’s minor at best. A prime example is the (faux) Japanning on this highboy, which was popular in Boston. While the highboys in Boston have true lacquer work, this Connecticut example has translucent black paint over a red base. The ornamentation is merely painted on this highboy where in Boston the Japanned pieces have raised decoration.

A few of the construction details are similar to highboy of the William & Mary period. In addition to the center-runner drawers and the cock beading on the scalloped aprons, the highboy has a solid front rail in the base cutout for the drawers and double-arch moldings around all the drawer openings. These features are direct holdovers from the earlier period.

There are a few details of this highboy that made it the job great fun. Just trying to figure out how to make the legs proved to be a challenge. (I’ve always sought challenges in my woodworking to keep it interesting.) And there are drawer construction details that are pretty cool too.

After examining the originals in Winterthur and at the MET, it was apparent that the legs were glued up from thinner boards. The first clue was glue lines that had shown up in the feet. Initially, I dismissed them as repairs – they’re old pieces after all. Looking closer at the period legs, I saw the joints aligned with seams in the knees.

Once glued up, I turned the funky pad foot and started shaping the cabriole leg. The hardest part was leveling the end-grain flat on top of the foot. It isn’t level with the floor, but it is quite flat and approaches the ankle at an extremely sharp angle.

Another fun detail of the Winterthur original is the drawer construction. I noticed immediately that the drawer fronts were rather tight in the openings. You might think that seasonal expansion and contraction might account for this, but it was something completely different.

Upon opening a drawer on the original highboy I noticed that it was not only constructed in the William & Mary fashion, but the pins on the half-blind dovetails were tapered. By angling the pins outward from the drawer sides, you can achieve an almost zero clearance on the fronts while allowing just enough wiggle room for the drawers to slide smoothly. As you close the drawers, the angled pins center the drawer box in the opening.

Below I’ve tossed in a few extra detail photos of my adaptation of the highboy. I want you to know that I did not do the painting on this piece. I got to do the ugly part; building the case. The painting was done by a fantastic artist I’ve known for decades, Angie Wendling Piacine. If you look carefully, you can see she captured the decoration perfectly.

I’d also like you to know that I deliberately did not overwork any of the surfaces of the highboy. At the customer’s request, plane (and other tool) marks were left along with glue and finish drips. And a fair amount of grunge was added to it a convincing appearance. The Winterthur original is far from Townsend-level workmanship. Again, it’s Connecticut.

Today’s 12 Days of Christmas discount code will work with several classes. Use day8 at checkout for 10% off either the Connecticut Highboy class or Matt Bickford’s Making Molding Planes or Using Molding Planes. The code is good for 72 hours and cannot be combined with any other discounts (if you take both of Matt’s classes or the Highboy class and the Carved Elements class there’s a discount already built in). 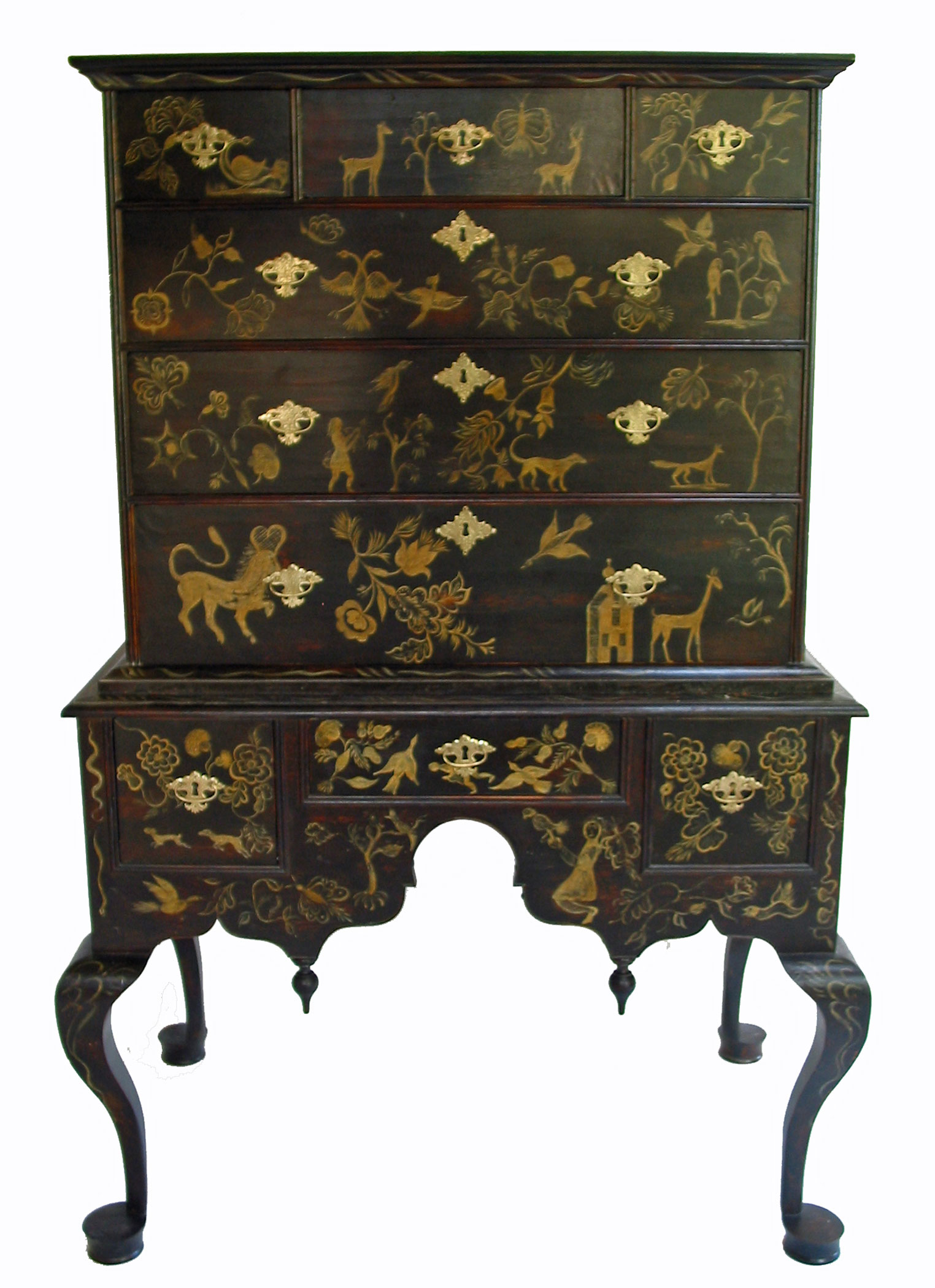 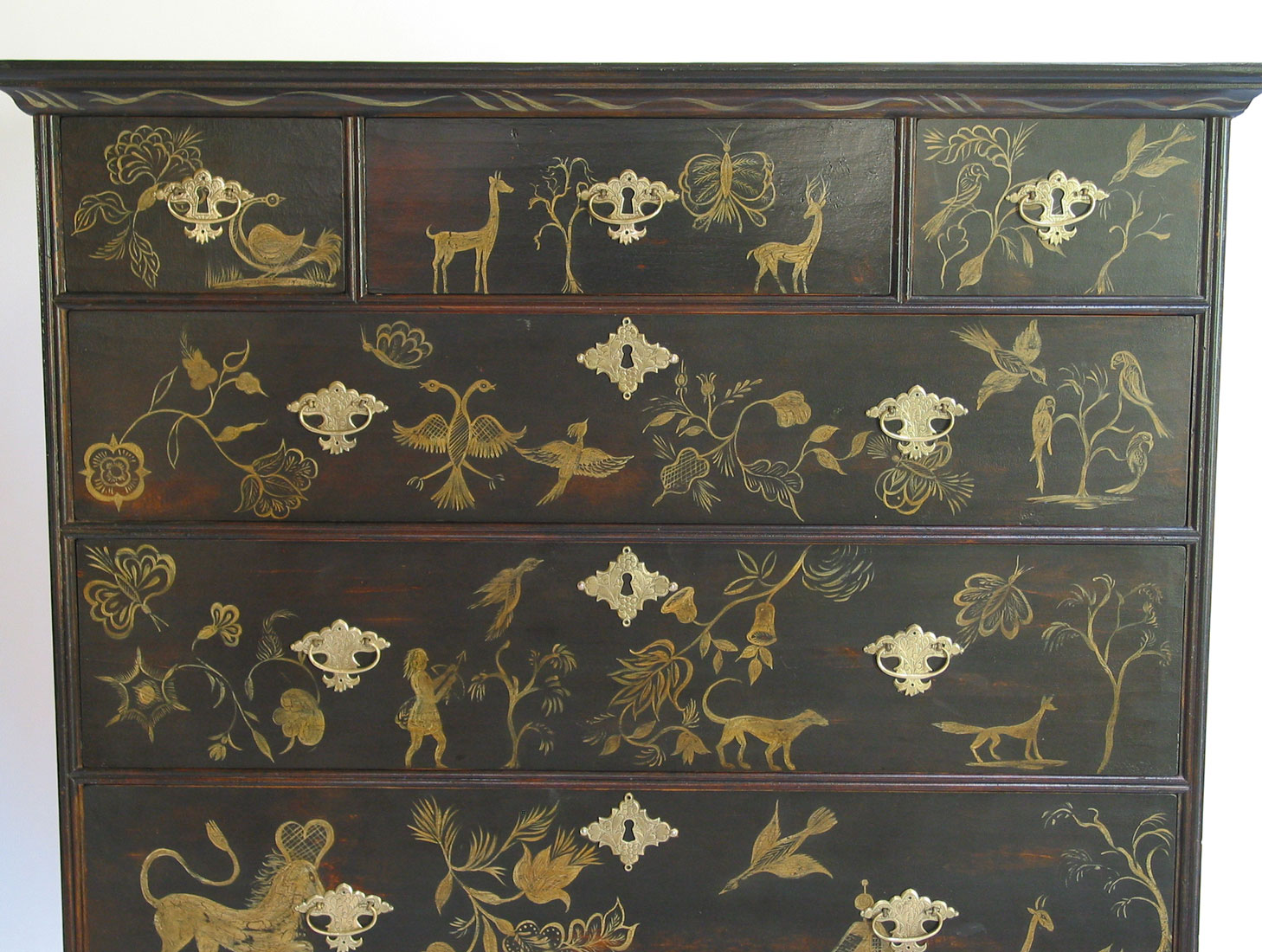 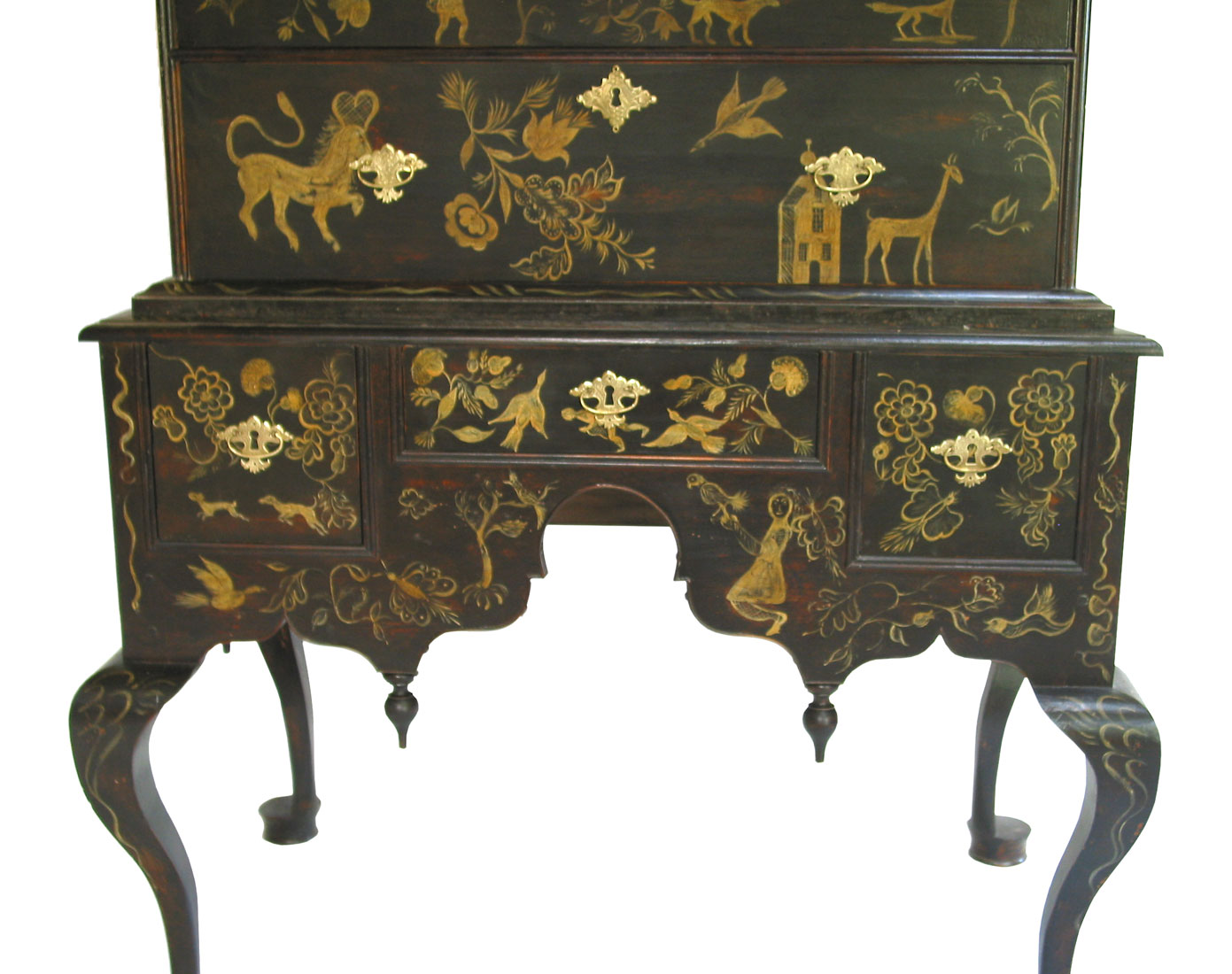 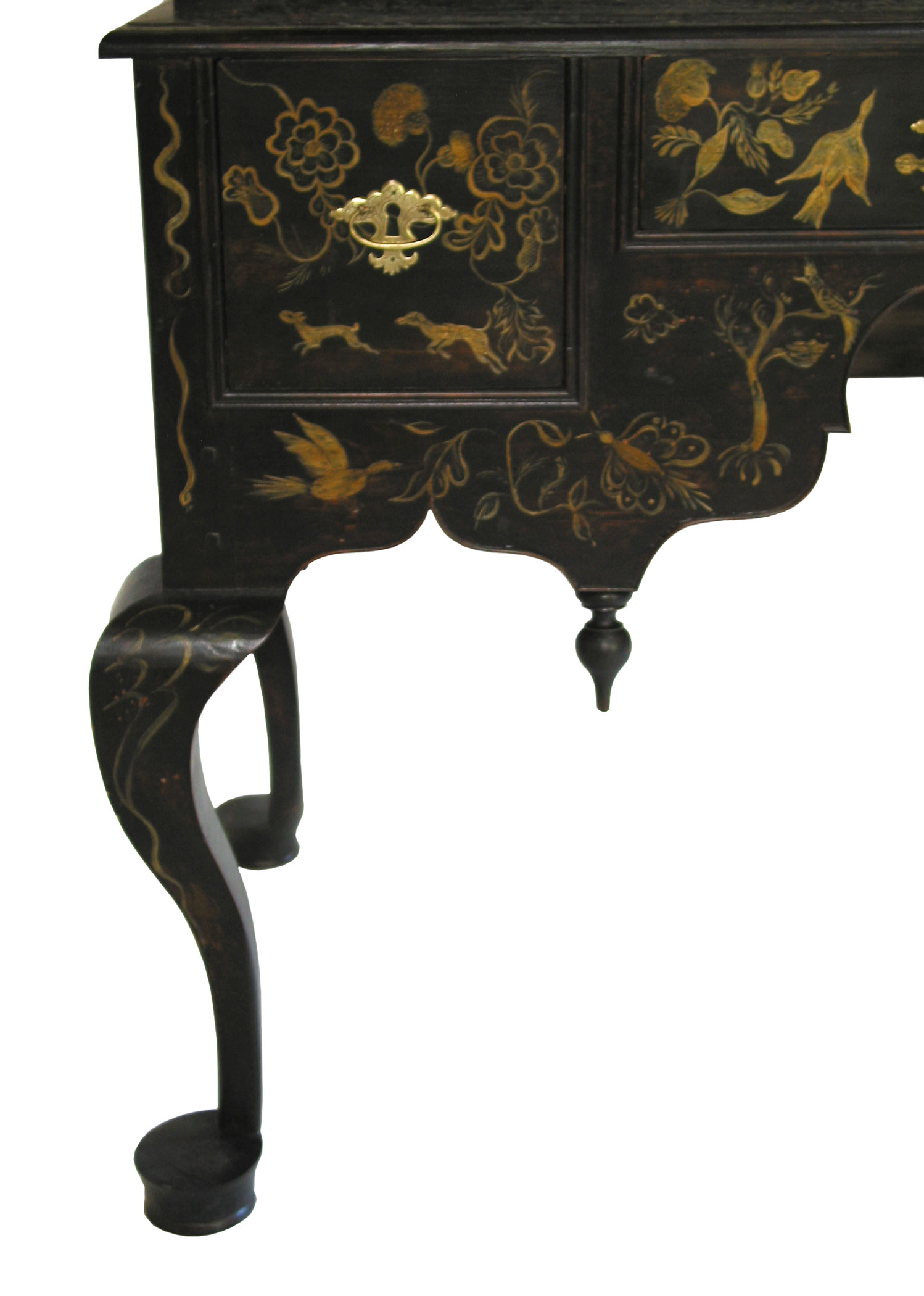 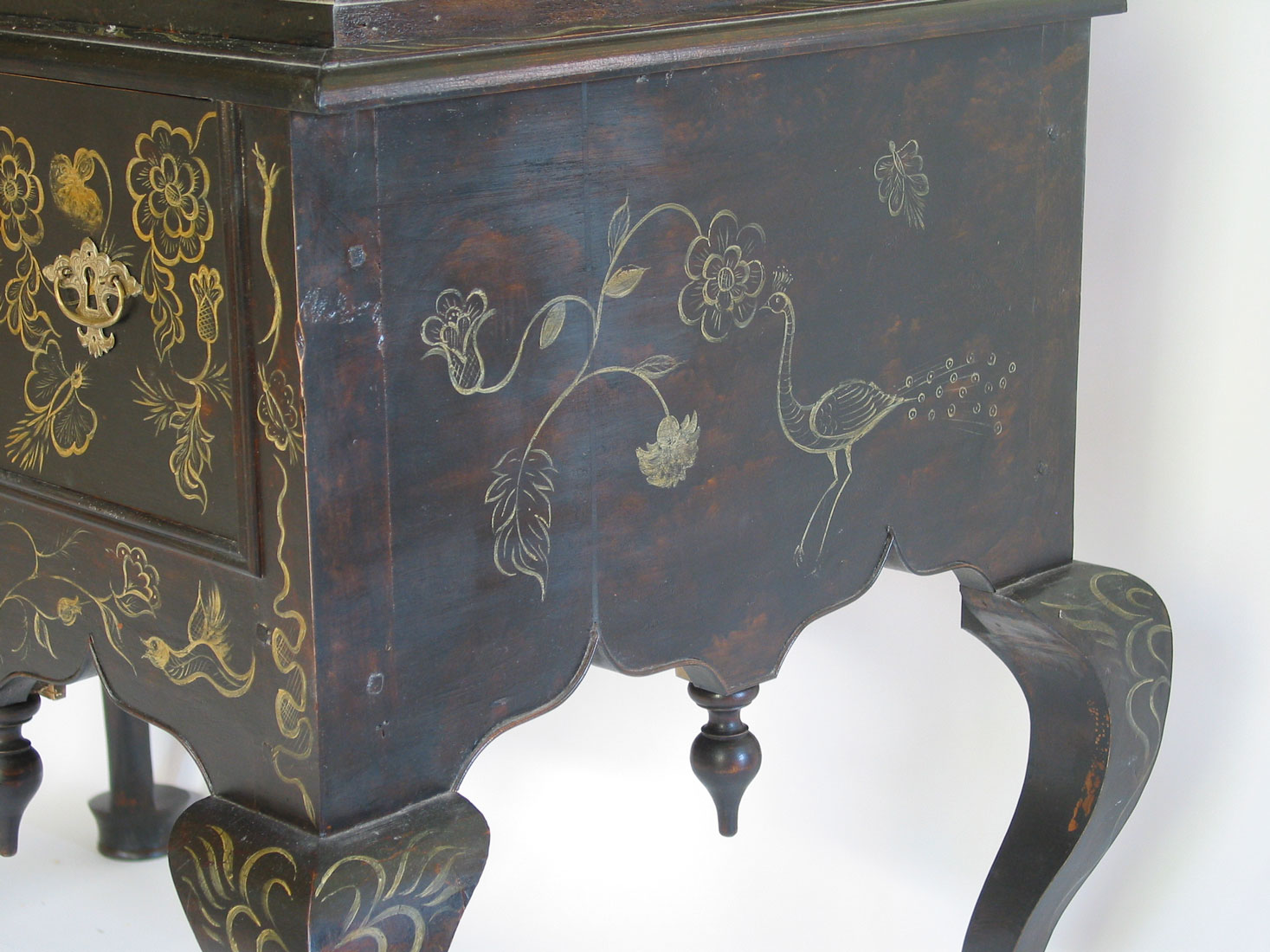 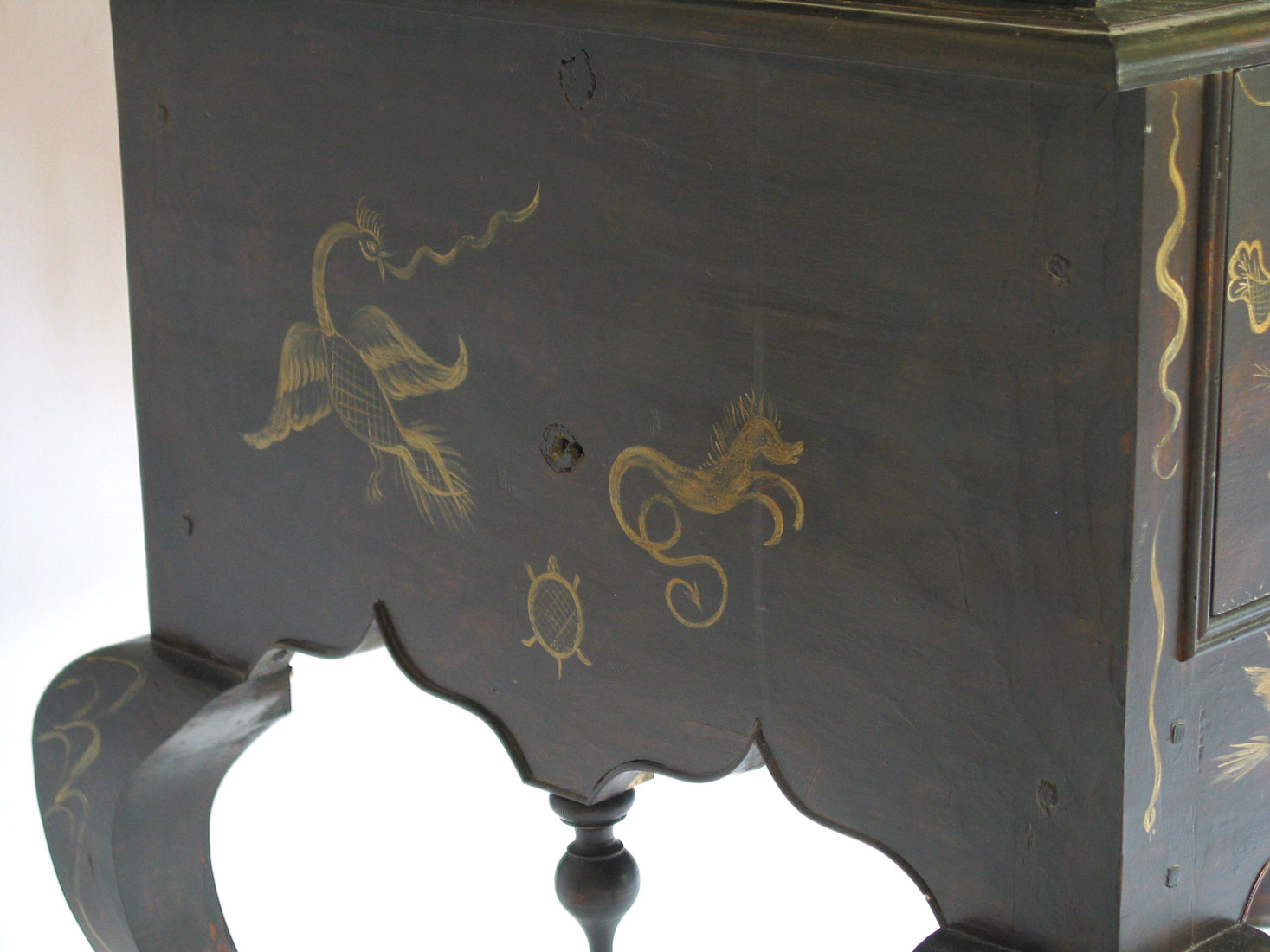